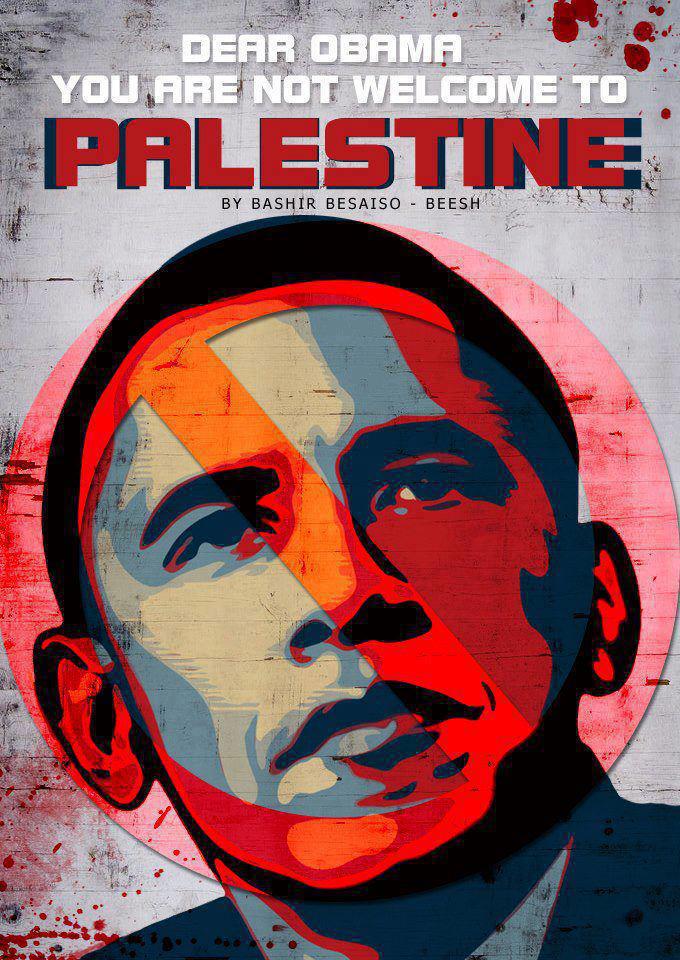 President Obama’s visit to the occupied Palestinian territory comes at a time when our prisoners are waging a hunger strike battle in the face of Israeli government obstinacy, and in the face of US silence towards the slow murder these heroes are being subjected to. Most recently Palestinian prisoner Arafat Jaradat died during interrogation inside the Israeli prison of Megiddo. Moreover, the visit comes in light of the continued international isolation of Israel and the ever-increasing boycott campaigns against it.

On one hand, it is simply naive to presume that U.S. policy toward Israel has changed since Obama took office. A March 2012 report by the U.S. Congress discusses a $3.1 billion in military aid for the year 2013 only, including financing the Iron Dome system, and increasing US bilateral support to Israel to $115 billion since 1949. In addition, the US is committed to maintain Israel’s security at the expense of the lives, land and livelihood of Palestinians; whether by justifying the massacres against Palestinians in Gaza, or through its silence concerning settlement expansion, destructions of homes, forcible transfer and other Israeli policies.

On the other hand, it is hypocritical and disingenuous that the Palestinian Liberation Organization (PLO) disregards the role of the Obama administration in blocking its membership request in 2011 at the Security Council, and its vote against the resolution at the General Assembly in 2012. Furthermore, the US congress has imposed financial sanctions on international institutions recognizing “Palestine”. And to add insult to injury, while the PLO/PA assure Palestinians they consider Jerusalem the Palestinian capital, yet they receive the US President in the Ramallah enclave.

Despite the attempts of the Palestinian “leadership” to ease the atmosphere, with statements about Obama pressuring the Israeli government on the issue of Palestinian political prisoners, or promises of petty US aid, however, the ultimate objectives of the visit are clear.

The visit aims to achieve three goals; first, to relieve the pressure off the Israeli government, which is suffering increased international isolation (albeit with words more than actions). Second, to restrain the frustration of the Palestinian street simmering in solidarity with Palestinian prisoners and finally, to prolong the expected lifetime of the PA, which after 20 years is becoming more and more disconnected from its people.

The Palestinian people will not accept to play a role in achieving these interests, and will not succumb to these pressures. What is required of us as Palestinians is to persue a complete boycott of our occupier on all fronts: security, economical, political, cultural and academic, and to rebuild a representative entity for Palestinians everywhere. Not aid in relieving the pressure on the Israeli government by engaging in a futile process, and allowing it to complete its expansionary policies and annexation through uprooting Palestinians from their land and homes.

Accordingly, we call on the masses of the Palestinian people to change this path and demonstrate against receiving he who considers Israel “the closest ally in the region”, and to refuse the return to futile negotiations. We call for entrenching the sacrifices of the martyrs and prisoners  by refusing to surrender and to work with Palestinians everywhere to establish  a strategic program of resistance, where political, economic, military, popular and various other forms of resistance and duties are shared each according to their ability.