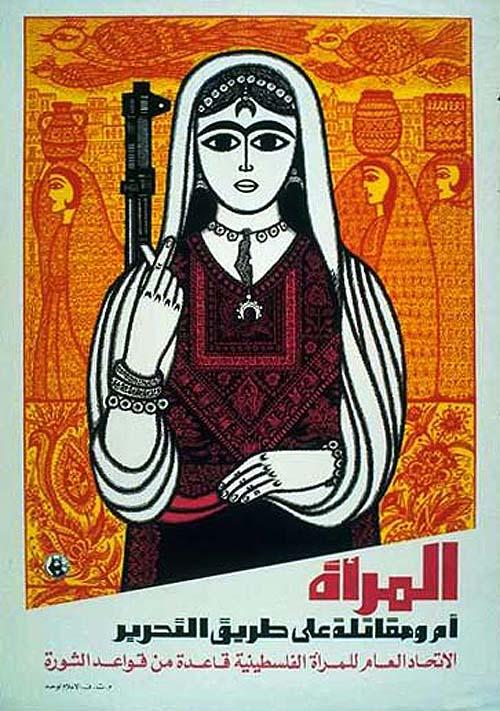 The following piece, by Reham Alhelsi, was published at A Voice from Palestine. We re-publish it here today with greetings, salutes and love to all of the Palestinian mothers who nourish children and the land, nurture Palestinian society, and lead, march and fight in the struggle.

On Mother’s Day, tell Hilweh Zeidan that we remember her on this day and every day. Tell her that we remember her courage, defying the bullets of the Zionist terrorists, standing by her husband and her son as they defend their home, as they defend Deir Yassin from the killers. Tell her that when she took her son’s gun, when she stood near her fallen husband and son, when she continued the struggle against the Zionists, Hilweh not only fought to defend her home, she fought to defend every one of us. Tell her that her spirit that feared no death, was our guide over the decades. Tell her that her blood which watered the land, paves the way for liberation. Tell Saliha Al-Halabi that the Zionist criminal who emptied his bullets into her body, killing her and her 9 month old unborn child, has not been brought to justice yet. Tell her that the Zionist criminal who afterwards ripped open her stomach and took out her slaughtered child is considered a hero by the terrorist entity that was built on where her village once stood. Tell her we still mourn her and the pregnant mothers bayoneted in the abdomen while alive. Tell her we still mourn the children maimed in front of their mothers before having their heads cut off. Tell her that 64 years later, her killers still kill Palestinian mothers, still commit massacres, still ethnically cleanse Palestine. Tell her that 64 years later, the Arab brethren still cry crocodile tears over our pain, still sell our blood to the highest bidder and still betray you mother Palestine. Tell her that 64 years later, we remember every victims of every Zionist massacre and every Zionist crime, we repeat the names of every Palestinian massacred, every village demolished, every field uprooted. Tell her that we are united by the pain and the blood of Deir Yassin, Beit Darras, Dawaymeh, Khisas, Sa’sa’, Balad Il-Sheikh, Abu Shusha, Beit Daras, Tantoura, Kufr Qasem, Qibya, Sharafat, Azazmeh, Beit Jala, Qalqilia, Jenin, Gaza, Bethlehem and every massacre committed by the Zionists. Tell her that 64 years later, we have not forgotten, have nor forgiven. Tell her that every day we tell the hypocrite world that it might turn a blind eye, but we will never cease until every single victim receives justice, until Palestine receives justice. Tell her that the march never stopped, and even though some have derailed, the majority has the map imprinted in their hearts, and with every march we come closer to Beisan, to Acca, to Tabariya, to Safad, to Jerusalem. Tell her, dear mother Palestine, that 64 years later, Palestine is as precious as ever, Palestine remains our home forever.

On Mother’s Day, tell Umayyah Imran that we remember her on this day and every day. Tell her that the Zionists still kill Palestinian mothers and their born and unborn children at the European-paid military checkpoints. Tell her that her children place flowers on her grave every day, that they sing their kindergarten songs to her. Tell her that her children and the children of every Palestinian mother killed at Israeli checkpoints don’t fear these death traps, but repeat the oath given to their mothers; to remain steadfast, to continue the struggle. Tell her that on the spot where she was left to bleed to death, the poppies defy the death traps and bloom every spring, brining a promise of hope and justice. Tell her that students, workers and farmers are still humiliated at the checkpoints, are still hunted down by killers hiding inside towers. Tell 16 year old Fahmi Al-Darduk, that his mother still cries over her only son, shot at an Israeli checkpoint and left to bleed to death, his only crime was listening to music from his cell phone. Tell 22 year old Bahsar Al-Qadiri, who was stopped at the death trap, tied and thrown into a pit and forced to stay there under the scorching sun until he died, that his mother has kept his room and his university books as he had left them, that she kisses his picture every day. Tell Nada Hussein that her 8 children celebrate Mother’s Day every year at her grave. Tell her that the Israeli soldiers who killed her still prevent patients from reaching hospitals, still delay them at checkpoints, leaving them to die a slow and a painful death. Tell Kamla Ash-Sholi that her two children keep asking about her, keep asking their father why the Israeli soldiers who shot their mother at the checkpoint for no reason were not punished. Tell her that Nahil Abu Raja still mourns her stillborn baby Zaid, killed by the checkpoint. Tell her that the mother of Khalid Mousa, the mother of Jamila and Huda As-Safadi, the mother of Aminah and Fatima Al-Qadi, the mother of Rawan Hreizan and many others still mourn their children, still remember them playing with their toys, still remember the day they were born, still remember the day they were stopped at Israeli checkpoints, prevented from reaching hospital and their children left to die while Israeli soldiers laughed. Tell 18 year old Kifah Zu’rub that his screams and cries still ring throughout his home, that his mother remembers every minute and every second of that day when her son was attacked by Zionists’ dogs, and prevented at the checkpoint from reaching hospital, how despite the injuries he was turned back home to die a painful death. Tell her that while Palestinian mothers and grandmothers are humiliated and killed at Israeli checkpoints, Arab brethren extend their hands to the killers. Tell her that while Palestinian pregnant women are forced to deliver at the roadside under the eyes and laughs of Israeli occupation soldiers, Arab brethren continue to talk about dignity, about “honour”. Tell her their cries for help and their screams of pain are music to the Zionists and fall on the deaf ears of the Arab brethren. Tell her that as life slips away, as they close their eyes, the world turns a blind eye. Today, on Mother’s Day, tell her dear mother Palestine and tell every Palestinian mother, that their cry for justice will never be silenced. Tell them that we won’t rest until we seek justice for Aisha Nassar, Rihab Nofal, Laila Baheiri and Rana Al-Jayyousi and every Palestinian victim. Tell her that we mourn with ever mother who lost a child, mourn with every child who lost a mother. Tell Fawziyyah Ad-Darak we remember every patient prevented from reaching hospital, every patient killed at Israeli checkpoints. Tell her we mourn her and mourn Khadra Mustafa, Fatima Ash-Sharafi, Basim Ar-Rimawi, Aisha Hasan, Safia Qandil, Khatima Abdel Rahman and every Palestinian patient left to die at the Israeli checkpoints.

On Mother’s Day, tell Wafa’ Ad-Daghmah that her children still see her lying on the ground in a pool of blood, still tremble at the memory of that day when Israeli occupation forces blew up their home and killed their mother in front of their eyes. Tell her that her blood refuses to be forgotten, her pain refuses to be silenced. Tell Manal Al-Batran and her 5 children that the Zionists still occupy the sky over Gaza, still occupy the land and the water. Tell them that Gaza homes are shelled by bombs and missiles while the so-called PA talks about freedom and liberation. Tell them that Palestinian schools in Gaza are targeted with illegal weapons while Arab brethren race to normalize with the Zionists. Tell them that Palestinian children in Gaza sleep to the noise of drones, and mothers don’t sleep at all, hug their children and try to protect them from the next missile. Tell them that Gaza says farewell to her children almost every day, while those who claim to represent us fight over chairs and imaginary posts. Tell them that Gaza stands alone and defies the daily Zionist terror while Arab brethren meet to coordinate new NATO invasions of Arab land. Tell Zeina Al-Awawdah and her 3 children that the world remained silent when the Zionist missile blew her and her children into pieces. Tell them that world leaders did not announce that they “cry with the people of Palestine”. Tell them that the so-called PA sold their blood without a wink of an eye. Tell them that the Arab brethren don’t even condemn Israeli crimes anymore. Tell Hayat Sheikh-Khalil that Gaza is still besieged. Tell her that the siege still kills Palestinians, still makes widows and orphans. Tell her that Palestinian mothers have to watch their children die a slow and a painful death, and fathers have to hear the cries of their children and not be able to do a thing. Tell her how young people, once full of hope and determination, wither in front of their parents. Tell Huda Al-Khawaja that her killers are welcomed in every world capital. Tell her that leaving her to bleed to death in front of her 5 children and preventing medical treatment was termed “a mistake”, for whom no one is to be charged or punished. Tell her that the world saw her die slowly, saw her children plead for help, heard the Israeli soldier say in front of the camera that they were doing “purification” work in the refugee camp, and the world remained silence, turned a blind eye. Tell Mariam Ayyad and Wajiha Rabay’a that their children have a million mothers now. Tell them that Palestinian mothers continue to protect their children from Zionist missiles, bombs, bullets and dungeons. Tell them that Palestinian mothers continue to rush and save Palestine’s children from the Zionist kidnap gangs and the death squads. On Mother’s Day and on every day, tell them, mother Palestine, that we mourn them, we remember them, we remember their sacrifices, we won’t forget the crimes. Tell them that we continue the fight for our and their freedom, for our and their rights, we continue to seek justice for us and for them, no matter how long it takes, because justice will prevail.

On Mother’s day and on every day, tell your daughters who have become part of you, whose bravery guides us, that we remember them, that we see them in the eyes of every Palestinian child, in the smile of every Palestinian mother, in every Hannouneh and in every olive tree. Tell them that the mothers of Palestine will continue to raise freedom-fighters, martyrs, prisoners and revolutionaries. They will continue to raise Palestinians, sing to them the songs of Palestine, tell them about Haifa and Beisan and Safad, teach them that Palestine will always be one from the River to the Sea, that rights are not begged for but are taken. They will continue to lead the struggle for a free Palestine, free from the River to the Sea, for they are your daughters, mother Palestine.

Oh mother of the martyr ululate, all the young people are your children
Oh mother of the prisoner rebel, death but not humiliation
Salute the revolting sister, salute the patient mother
We choose the time and we decide the place
Our words are our deeds and our souls in our palms
And if we die, our children continue the march