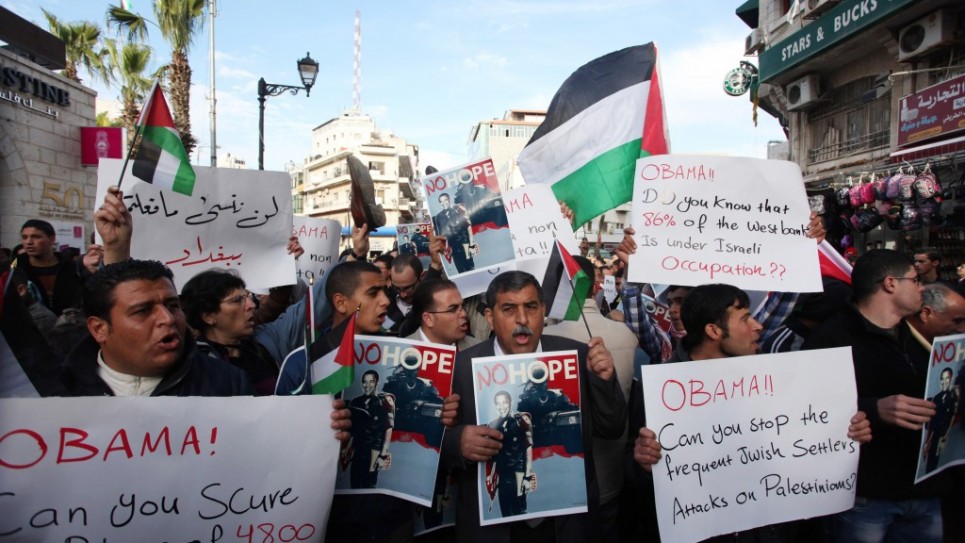 No Condescending Saviours: Obama Unwelcome in Palestine
by Omar Shaban

Obama’s speech in Ramallah reaffirmed my conviction that the conference that will be held in Vancouver in May is more important than ever – and this is why.

With an extremely patronizing and condescending attitude, and with a saviour mentality, Obama barged into the Palestinian territories unwelcomed to preach to Palestinians on how to go about resisting the occupation. He stood by the side of the PA’s unelected President Mahmoud Abbas surrounded by American flags with an annoying smirk on his face bragging about American support for the creation of “an independent and sovereign state of Palestine.” Note how he chose the preposition “of” instead of “in” indicative of the general American attitude towards Palestinian national self-determination, which demands that Palestinians forget about their sentimental, national and historical attachment to all of Palestine, settle for whatever is left and establish what may look like a state.

He then continued with commending Mahmoud Abbas and Salam Fayyad – Palestinian Authority officials who are widely recognized as willing puppets and symbols of corruption, exploitation and subservience to a settler colonial agenda. Brushing aside all the efforts of the Palestinian civil society and grassroots organizations at maintaining the existence of the Palestinian national identity, actively resisting the ongoing occupation of Palestine and serving the Palestinian community day after day, Obama insisted on highlighting what he referred to as “the progress they [Abbas and Fayyad] made,” which could not have been accomplished without the measly donations provided by USAID.

“Ramallah is a very different city” that suits what Obama wants Palestine to look like – the bastion of corruption, embezzlement and exploitation of Palestinian sweat and blood. “Palestinian security forces are stronger and more professional” and, I should add, are better at executing their mission – repressing Palestinian activists and dissidents, shutting down blogs and news websites that speak out against the occupation, arresting and jailing Palestinian youth and torturing armless young men, women and elders.

He then decided, as a bad guest, to feed the division between Ramallah and Gaza – by employing the standard and infamous divide and conquer techniques that give legitimacy to the colonial intermediary (the PA in Ramallah) and demonize what the Palestinians last elected as an authority (the government in Gaza). Ramallah’s puppet rulers who appealed to the morals of the occupiers are the the way forwards, whereas those who resist occupation “have blocked progress for so long.”

It needs to be made very clear that the Palestinians do not need Obama or anybody to lecture them on how to resist the Israeli occupation; and this is why this conference is very important. Travelling from all across the world, Palestinian activists will congregate in Vancouver to express solidarity with the Palestinian people, bring to light the plight of the Palestinians in the shatat especially in the refugee camps, discuss and create more efficient methods at fighting the general Zionist discourse which promotes colonialism and imperialism, dismantle the myths that the current leadership of the PLO and PA try to perpetuate, and build a united vision for the future.

This conference is going to reject Obama’s condescending attitudes. It will send him and his allies in Canada and Europe a clear message that the Palestinian people is not in need of his measly USAID which when compared to aid he gives to Israel is less than a drop in the sea.

Palestinians inside and outside of Palestine do not need a war criminal to tell them that they have “the talent, the drive, and the courage to succeed in their own state” – they already know that.